From Dr. Bonner's "Boy" To A Trained Medical Specialist Supervising Other Men 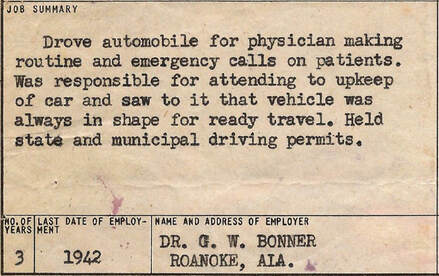 Summary of Wilkie Clark's previous job BEFORE he entered the military in 1941.
The image on the left depicts a section from Wilkie's military record, which summarizes the work he did prior to enlisting in the United States Military.

He worked for Dr. G.W. Bonner, a prominent white doctor in the city.

According to the record, he "drove automobile for physician making routine and emergency calls on patients.  Was responsible for attending to upkeep of car and saw to it that vehicle was always in shape for ready travel.   Held state and municipal driving permits.
The report states that he did this job for 3 years.

Section from Military Record showing training he received in the military, and rank as well as duties.

As can be seen from the report shown above, his qualifications changed drastically from the time he left Roanoke, Alabama, until the time he was discharged from the military. "Was in charge of Medical Aid Station serving 650 men in Field Artillery Unit. As a non-commissioned officer in charge, supervised and assigned duties to 5 technicians. Assisted Medical Officer in surgery, administering of medications blood plasma and the dressing of wounds. Gave immunization shots and did routine vaccinations. Also administered sulfa drugs, bismuth-arsenic and McPherson formulas for venereal disease. Requisitioned drugs and other supplies necessary to the operation of aid station. Was responsible for the maintenance and use of all equipment." He could recite so well, the training he received while in the military, and everything he learned to do while enlisted. He could also recall so well, that the white Dr. wanted him to return to his former duties as a "car boy," which Wilkie was no longer interested in after realizing his potential while enlisted in the military.