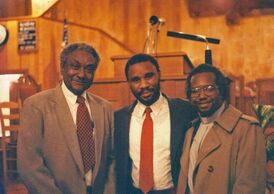 The photograph shown captured a moment from one of our many Emancipation Proclamation Programs, which was initiated in Randolph County by the late Wilkie Clark.

The featured speaker for this particular program, was our own, Dr. Alvin Thornton.

For more than 30 years, my father, the late Wilkie Clark in his capacity as President of Randolph County’s NAACP, took on the personal responsibility of seeing to it that an Emancipation Day Observance was staged in Randolph County (Alabama), annually. He upheld the teaching of the NAACP, that in order to experience racial progress, black people needed these constant annual reminders of their journey from enslavement and oppression to liberation.
Reflecting back, I recall vividly how poorly attended the early Emancipation Proclamation Services were. How well do I recall, black Randolph Countians’ hearts were so tightly gripped with fear that something bad would happen to them if they participated in NAACP functions. But, as the years passed, and the burden of racism and Jim Crow began to lift, these programs began to experience better participation and interest. The Annual Emancipation Proclamation Observance began to serve as an eye-opener for many blacks, who’s understanding of "Emancipation" had been long obscured by the veil of ignorance of black history.

For Randolph Countians, this annual affair came to serve as a catalyst for change and a reminder that every opportunity that has come to black people in America involved struggle. Nothing has been given to us. Every opportunity we enjoy today...whether it be jobs, home ownership in the neighborhood of our choice, or equal access to services in public restaurants and bathroom facilities.... all were bought with a steep price. The price often involved bloodshed and even loss of life. I would always emerge from the Emancipation Proclamation programs with a new awareness and better appreciation for the compelling history of my African forefathers. The question arises, do we need to continue to stage these annual reminders of black history? I believe that we do. In a large measure, we have failed to pass the torch that was ignited by the patriarchs of civil and human rights. We have failed to continue teaching the lessons our forefathers taught us about real freedom. This failure has resulted in an inexcusable and frightening lack of appreciation and respect for the struggle for equality among modern black youth. As I observe them, I see a bleak picture that can only send them on a downward spiral unless we go back to "The Old Landmark." This is a place they cannot take themselves...because many of them have never been there before. Rather, this is a place where we must take them to.
Today’s black youngsters need to be infused with the understanding that for black men, women and youth, the idea of "freedom" must transcend any other level or concept that can be imagined by any other race of human beings. Too many of today’s black youth have a warped, faulty idea of what "freedom" is all about.

When President Lincoln signed The Emancipation Proclamation in 1863, black slaves for the first time in centuries, experienced something that they had never experienced before. The freeing of the slaves brought an end to the bondage; the restrictions on their movement, their thinking, their intelligence. The real appreciation for freedom can only come, when one has experienced restrictions and limitations on their life. Only then can there be a real appreciation for liberation. For too many of our children, proper limits have never been set, so there is no appreciation for or understanding of real "freedom." Many of them have never had any limits set in their lives. They’ve never been told "NO" by their parents. For many of them, there is no parent to ask. Our children need to know and understand the real meaning of freedom. But, they will never learn how to appreciate freedom unless and until we begin to set limitations on them. Abraham Lincoln, The Great Emancipator said:

"Freedom is not the right to do what we want, but what we ought. Let us have faith that right makes might and in that faith let us; to the end, dare to do our duty as we understand it."

We’ (Black America), have given our young folk too much liberty. So much to the point, that they’ve taken un-realistic liberties, often overstepping their boundaries, disrespecting authority; refusing to obey anybody. We’ve led many of them to believe that everything is free; few of them know or understand how to work and make an honest dollar; they have poor work ethics because they have been given everything and have never been made to do a task the absolute best it can be done. Many of them don’t have chores or responsibilities at home. Consequently, they have a poor and irresponsible understanding of "freedom." Real freedom is a state of mind. Real freedom makes one more – NOT LESS responsible for his or her actions. Real freedom makes one think longer and harder about their actions – BEFOREHAND, not as an afterthought.

Real freedom respects life and health and property. Black America, it’s time to reclaim, re-define and re-teach the real meaning of "freedom" for future generations of black boys and girls. It’s imperative that we do this...for the salvation of our youth.