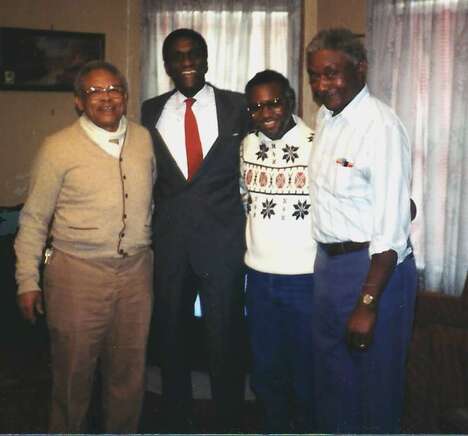 This photo was taken by Charlotte A. Clark-Frieson, on February 23, 1989 -- it was NO ORDINARY DAY.  This was the day that Mrs. Hattie Lee Peters Clark passed away.

The family had just arrived home from Randolph County Hospital, where Mrs. Clark had lingered in the ICU for about a week.  She finally succumbed and because of the bereavement, the family's pastor, The Late Reverend John W. Forbes was there, along with Reverend Lathonia J. Wright.


Mayor Johnny Ford, who was one of the most influential black politicians in the State of Alabama knocked at the door, and though we were bereaved and grief-stricken over the loss of Mrs. Clark, we all were engulfed with pride when Mayor Ford walked into the Clark residence.

At this time, Mayor Ford was running for the United States House of Representatives from District 3 (The seat currently held by Congressman Mike Rogers (R), and somehow he learned that Wilkie Clark was somebody who might could help him to rally the black vote in Randolph County, and he knocked on the door.

This was a surreal moment for everybody in the house because -- though we were grief-stricken -- we were momentarily extricated from that blackness because of the honor we felt to have such a personality as Mayor Johnny Ford to grace our home.   I seized on the moment to capture it in a photograph.

We feel this one picture is worth 1000 words, because it certainly is testament to the influence Wilkie Clark and his name and reputation carried with it, in his community.

If you notice, Wilkie Clark's eyes were red from nights of sitting in the ICU in the week leading up to his wife's death.  They were also red from crying as hardly an hour had gone by since she passed.