Chief Cook and Bottlewasher: The Unconquerable Soul of wilkie claRK 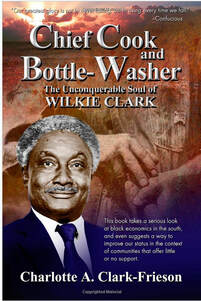 Description :
A DAUGHTER’S BIOGRAPHICAL TRIBUTE TO A STRONG AFRICAN-AMERICAN FATHER The poignant, powerful life story of Wilkie Clark is lovingly penned by his only child, daughter/author Charlotte A. Clark-Frieson. It celebrates a man who enlarged himself to untold dimensions, as he struggled to serve humanity and liberate an entire community of oppressed people. He stood tall under the unbelievable weight of Jim Crow. This book takes a broad but serious look at the economics of racism as it was practiced in the south. As no one else could, the author translates her love, reverence and respect for her father into a moving statement of his life, works, trials, tribulations, victories & triumphs. It's a "must-read" for anyone facing the question of how to turn your dream into reality, despite life's unending adversities. "Telling daddy's story literally became the "healing balm" that's helped me come to terms with the continuing battle for spiritual, social, and human affirmation that have persisted throughout my life despite the apparent racial progress that has been observed during my own lifetime."