A Guided Digital Tour Of The Lives, Legacies and Works Of Wilkie And Hattie Lee (Peters) Clark as presented by their offspring:  their only daughter, Mrs. Charlotte A. Clark-Frieson; grandson, Wilkie S. Frieson, and Granddaughter, Je'Lynn M. Frieson..

SUMMARY:   This is a re-write of an article published in the December, 2005 Issue of The People's Voice Weekly News.  The article was authored by Mrs. Carolyn J. Knight Davis of Roanoke.  It details a story of her older sister, Rosella Knight Parker, who was deprived of her educational opportunity at the hands of the Randolph County School System.  It is a story of triumph and victory over the oppressive conditions she experienced as a student during the turbulent desegregation years in Randolph County, Alabama.   Of particular interest is the role taken on by Wilkie Clark and Mrs. Hattie Lee Peters Clark, which further validates the important role they played in helping usher many black students through the desegregation process. 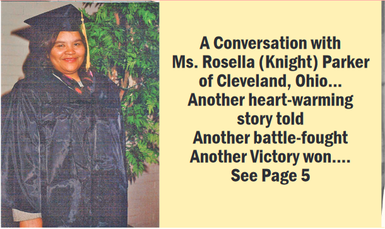 African Americans have been fighting the battles of racial issues for as long as we can remember. Even though some of the battles have been overcome, we continue to deal with many obstacles.    It takes strong will and the courage of believing that we have the right to any opportunities that any nationality have in order to live a normal and enriched life.


One lady who has been confronted with many racial obstacles would like to share her story with you. Her name is Rosella (Knight) Parker. In sharing her story, she hopes that many will be encouraged, gain strength and push forward in believing that their dreams and goals can be accomplished.

It all begins on the school bus in Roanoke, Alabama.   After an altercation with a fellow bus rider, Rosella was taken to the principal’s office after the bus arrived at school.  The school was Randolph County High School, Wedowee, Alabama. The Principle’s name was Mr. Hulond Humphries. Mr. Humphries told Rosella that, “It is “your kind who starts trouble.” She was immediately suspended from school and told that she would have to be paddled before she could come back.

Rosella received her paddling but was still not able to return. In fact, she along with her sister was barred from all of Alabama schools. Her mother, Mrs. Inez Knight took Rosella and her sister to Georgia to try to get them enrolled in the school system there. She was told that things would have to be straightened out in Alabama in order for Rose and her sister to continue their education.

The late Mr. Wilkie Clark was extremely helpful in trying to get Rosella back in school. He realized the importance of an education and how hard it was for African Americans to succeed. He would transport her and her sister where ever needed trying to get them back in school. Finally, Crayton Turner, Rosella’s uncle, was contacted and came from Cleveland, Ohio to carry them there to further their education. After a period of time, Rosella became homesick, and moved back to Roanoke, Alabama. He mother took her to Handley High School and asked could she attend school there.
The principle during that time felt that everyone had a right to an education and allowed her to attend there.

Mrs. Parker graduated in 1977 from Handley High School, Roanoke, Alabama. After going through a divorce,  she moved back to Cleveland, Ohio. Being a single mom and realizing the high cost of living in Cleveland, she saw the need to further her education in hopes of providing a better life for her children.    At times, she was only able to pursue one class at a time. But she never gave up.  She started with a six month program and became an Office Specialist. Being the top of her class, it landed a job as a receptionist in The Cleveland Clinic Foundation Hospital.   She then enrolled in a nine month program to become a Medical Secretary.

Rosella recalls what a low level of self-esteem she had back then.

But, it was also at that time she met Professor Gwen Jones who took an interest in her demeanor.  Ms. Jones encouraged Rose to work on her self-esteem and to learn to hold her head up. Ms. Parker began telling Ms. Jones about the incident in Roanoke, Alabama. Being from the south, Ms. Jones was even more encouraging.  Through encouragement, Rosella was able to overcome low self-esteem and further her education.

In 1991, she decided to pursue nursing school.  She went through the LPN program because it was only for a year. She was trying to find something that would help provide a decent income and still allow her to be a mom to her children. Because the LPN classes were intense and classes were five days a week, her mom, Mrs. Knight became her permanent babysitter. The  safety of the children was top priority!

Through all of the difficulties of being a single mom and children will be children; Rosella took full responsibility of providing for them. It took prayer, late nights of studying and riding the public bus in order to finish her education.  Rosella realized that the teachers were most interested in the” cream of the crop” students.

She maintained her GPA average and completed the nursing program being one of top students in the class. While working for her LPN license, she felt that the city was too dangerous for her children and moved them to Selma, Alabama. The children were able to stay focused on their education. At one point in time, Ms. Parker and her daughters Mel and Tia were enrolled in the same college in Selma, at the same time! Working together, they were able to assist each other in furthering their college education. Rosella received her Associate of Science Degree and was accepted in the RN program. Once again, Rosella saw the need to put her career on hold for the sake of her children.

She allowed her children to finish their education first. She states, “In my heart, I never gave up on my education.” She returned to Cleveland, Ohio to  further her education. There, she met the love of her life, who took an interest in her education.  He told her,”if you want to continue your education, get it done while I am able to help you.” He also  took full responsibility of her financial obligations and assisted her children where needed.  Rosella found a Christian college in the suburbs of Ohio, applied to the program and was accepted.

She began receiving cards from her sister Norma that “if they can teach it you can learn it.”  Rosella (Knight) Parker’s journey had just begun. She states,”there were three African American students accepted into this program. After a year, I was the only African American (out of 85 students) left in the program. The instructors were very helpful in assisting Rosella in her training to become a nurse. While sitting in the Dean’s office, she was asked if she needed any assistance. She said, “Don’t yell at me and don’t curse at me.” The Dean smiled and stated, “We do not behave that way here.” She assured Rosella that she would be fine.

At age 45, Ms. Parker realized that she was far behind on modern technology. She was in classrooms with students that were half her age, and began to feel out of place. She told her fellow students and instructors how she was feeling. As a result, everyone would take time out and assist her in learning computer skills and anything that was needed to further her education.   She once again built up her self-esteem, and was on her way to receive the degree she so long desired.  After 2 years, only 19 out of the initial 85 students were left in the program. Because of the programs extremely high standards, Ms. Parker had to struggle even harder to maintain her grades. In May of 2004, she proudly marched and received her Bachelors of Science Degree in Nursing. She plans on going back to school to pursue a Masters Degree in Public Health.

Rosella then began speaking of the influential people in her life. She began telling me about (the late) Mr. Wilkie Clark and his wife Mrs. Hattie P. Clark, who was one of her elementary school teachers. She recalled, “Mr. Clark was taking us everywhere trying to get us in school.” He realized the importance of an education and how hard it was for African Americans to succeed.    Mrs. Clark was her favorite teacher in elementary school. Rosella recalled how Mrs. Clark would always look out for Rosella by holding back one of those little red tickets so she could eat lunch at school. Mrs. Clark told her that had a lot of potential. Rosella speaks highly of the late Mrs. Hattie P. Clark, even down to this day. She states that she is still her favorite teacher out of all of the ones that she’s encountered.

After a period of time, around late summer of 1994, Rosella was contacted by the Geraldo Show asking if she would appear on their show allowing it too aired on television. Mrs. Charlotte Clark-Frieson also contacted her hoping that she would tell her story as well. But, at the time, Rosella declined because she didn’t want to re-live that horrible part of her life. Her only concern had been to finish her education.

Rosella (Knight) Parker is very proud of her children. Melanie has a Bachelor of Science Degree in Nursing, and is currently working on her Masters Degree in Forensic Nursing. Latia is writing a book, and is working on her Bachelors Degree in Human Services. Jerry Jr. is pursuing his music career while trying to find himself. Rosella wanted her story to be told to give people of all ages the incentive to never give up. She states, “No matter what life throws you, always put God first; deal with the cards that are dealt to you (know anxiety comes from trying to rush what God already has planned for you); never forget those who have assisted you along the way, believe in yourself, and most of all be patient.”